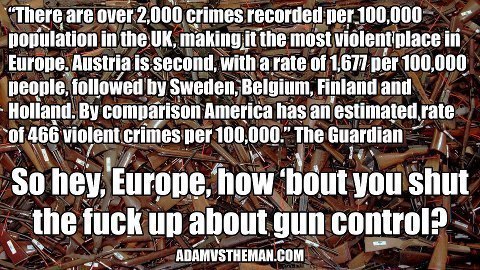 “There are over 2,000 crimes recorded per 100,000 population in the UK, making it the most violent place in Europe. Austria is second, with a rate of 1,677 per 100,000 people, followed by Sweden, Belgium, Finland and Holland. By comparison America has an estimated rate of 466 violent crimes per 100,000.” The Guardian
So hey, Europe, how ’bout you shut the fuck up about gun control?

Why Blame Guns for Violent People?

90% of Knife Crimes are Committed With Assault Kitchen Knives

The iShoot: A handheld device to communicate with violent criminals

49 thoughts on “So Hey, Europe, How ’bout You Shut the Fuck Up About Gun Control?”