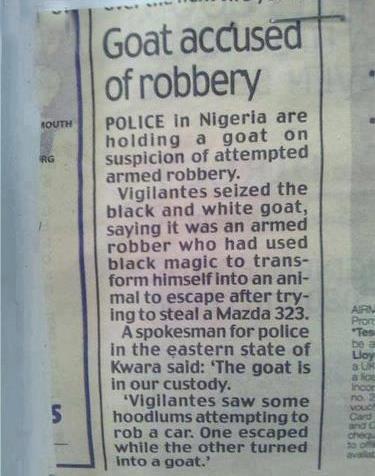 Police in Nigeria are holding a goat on suspicion of attempted armed robbery.

Vigilantes seized the black and white goat, saying it was an armed robber who had used black magic to transform himself into an animal to escape after trying to steal a Mazda 323.

A spokesman for police in the eastern state of Kwara said: ‘The goat is in our custody. Vigilantes saw some hoodlums attempting to rob a car. One escape while the other turned into a goat.’

His Children Go to School with Armed Body Guards with Them at All Times.

An Armed Society is a Polite Society.

The Police of a State Should Never Be Stronger or Better Armed than the Citizenry.

Mocks the NRA for Suggesting Armed Security in Schools

You Just Hate Me Because I’m Black

If More Sane People Were Armed; the Crazy People Would Get Fewer Shots Off